East Durham Creates shares its experience of action learning, non-arts partnerships, experimentation and the lessons it has learnt along the way.

East Durham Creates (EDC) is a programme of arts and cultural activity across East Durham. The original aims of the project were to:

EDC is one of 21 Creative People and Places (CPP) programmes funded by Arts Council England, and in phase one, from 2014 to February 2017, has been delivered by a consortium comprised of Forma (an organisation of creative producers), East Durham Trust and led by Beamish (an open air museum in Country Durham), supported by the East Durham Area Action Partnership (EDAAP) and Durham County Council. As the area covered is large, with communities being geographically isolated, East Durham Trust’s role in the partnership - as a trusted organisation running projects to fight disadvantage across the area - was to broker relationships between EDC and the communities and to help to embed activities into the local community.

Drawing on interviews with staff from EDC and East Durham Trust, the project’s critical friend
and a member of the community panel, this case study focuses on how the non-arts partnership between EDC and East Durham Trust functioned, as well as the key outcomes of the programme including what worked well or less well and the main lessons that have been learned.

East Durham is an area of high deprivation, with 23.9% of the population living in the top 10% most deprived Lower Layer Super Output Areas in England. As a former mining community, it has struggled economically since the decline of the coal industry and the closure of the collieries, as well as the railway industry which was heavily impacted by the decline of the mining industry. The area is vast and is unique in that it is comprised of many small former mining villages with their own centres and venues which can be utilised for community activities. However, the public transport infrastructure is limited, meaning it can be difficult for people to travel across the area with ease. Those interviewed commented that the geography of East Durham is different to many of the other CPP areas, in that the communities are quite isolated, with relatively high proportions of people with long-term mental and physical health problems, low income and an ageing population. Given the relatively high levels of deprivation, there has been a long-standing history of investment coming into the area - often comprised of short-term grants or regeneration initiatives, instead of lasting infrastructure investments - and rather than making lasting, positive change, communities have felt that the funding has often failed to meet expectations and has only scratched the surface of issues in the area.

Prior to CPP, there was very little arts infrastructure in terms of venues and events. However, one of the consortium partners East Durham Trust – had a membership of 325 group, of which some had interest in the arts realm, such as painting, drawing and musical groups and choirs. The stakeholders interviewed felt these were disjointed and at times insular groups before CPP, and as a result had not engaged a large number of people in their activities. In addition, there had been a change to local authority arts and cultural provision, which meant that when the CPP funding was announced, there was a general misunderstanding by the public that it was in lieu of council funding. Stakeholders felt that the general attitude towards the arts before CPP was that while it has its benefits, it’s mainly something that’s ‘good for the kids’. The challenge for EDC, therefore, was to engage a wide range of people who may have thought the arts wasn’t for them.

“We’re always on the lookout for initiatives and moves that would help to achieve our overall objectives and values.” East Durham Trust

Non-arts partnerships are therefore at the core of the EDC project, not only with East Durham Trust as a key delivery partner, but also with EDAAP, which has its own priority groups around maintaining the social fabric of society; health, mental health and wellbeing; and children and young people. EDAAP’s role throughout EDC was to assist with community engagement activities by linking councillors and community group networks, as well as securing funding. 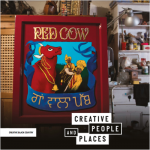 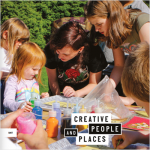