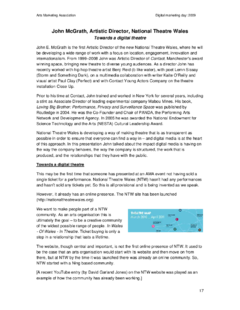 
This document looks at how National Theatre Wales was founded in 2008 to create a theatre which is exciting and relevant to people throughout Wales and to be a theatre without walls.

It provides an insight into the key considerations behind this development, including the fact that there are few national theatre institutions known for their digital offering and that cultural organisations should be about building creative communities, with a new approach to branding and identity that embraces ideas of community.

NTW is a virtually-run organisation. There is no office server. All the documents are stored on the ‘cloud’ and staff can work from anywhere. Staff are kitted up with equipment for recording video and audio. It means that the organisation can cover Wales and it can do it digitally. This meant that the launch on 5th November could be done digitally rather than in a building.

It was quite imaginative – anyone who told us that they were watching as part of a group was sent a cake and on the day over a 1,000 computers logged on.

There are a wide variety of shows, some of them very traditional, others are site-specific and some are digital in their making. The digital was intentionally added, not as an extra but as a key part of the programme.

For example, we commissioned Hide and Seek to produce a taster piece of interactive