Culture, participation and the web 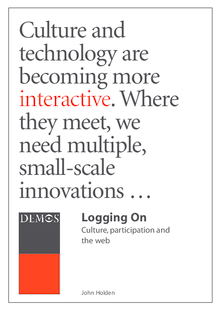 
This report looks at the convergence of three trends:

There is a continuing need for an agency where culture and technology meet. Such an agency should:

The future of the cultural sector in the UK will be heavily influenced by what new technology has to offer. In a rapidly developing environment, populated by heterogeneous organisations, large-scale directive government interventions are likely to be counterproductive. Instead, an entrepreneurial, agency-led system would help to promote multiple small-scale innovations. Such innovations must be encouraged and networked together to take full advantage of the energy, vitality and knowledge that the cultural sector brings in its approach to technology.