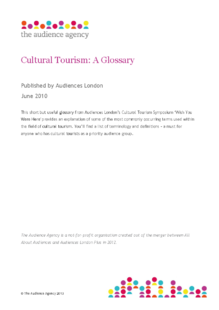 
This short but useful glossary provides an explanation of some of the most commonly occurring terms used within the field of cultural tourism. You’ll find a list of terminology and definitions – a must for anyone who has cultural tourists as a priority audience group.

A block booking of hotel rooms or airline seats by an operator or agent who
can then call on that allocation without having to keep re-checking availability
with the hotel or airline, until a specified release date.

For commerce rather than pleasure.