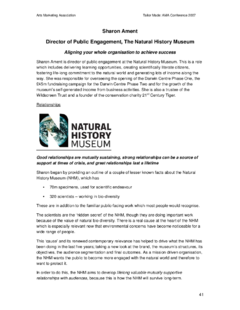 An insight into how The Natural History Museum aims to create life-long relationships with its visitors which rely on them being connected with all aspects of the Museum's work.  For an organisation that has 40 different logos and a complex structure, this is no easy task, and this case study shows you how it can be achieved, and how the 'magic' happens.

Sharon began by providing an outline of a couple of lesser known facts about the Natural History Museum (NHM), which has
• 70m specimens, used for scientific endeavour
• 320 scientists – working in bio-diversity
These are in addition to the familiar public-facing work which most people would recognise. The scientists are the ‘hidden secret’ of the NHM, though they are doing important work
because of the value of natural bio-diversity. There is a real cause at the heart of the NHM which is especially relevant now that environmental concerns have become noticeable for a wide range of people.

This ‘cause’ and its renewed contemporary relevance has helped to drive what the NHM has been doing in the last five years; taking a new look at the brand, the museum’s structures, its objectives, the audience segmentation and final outcomes. As a mission driven organisation, the NHM wants the public to become more engaged with the natural world and therefore to want to protect it.