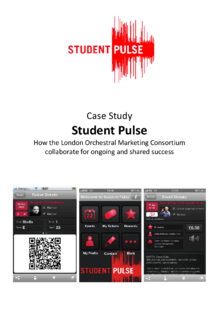 Creating an app to increase engagement and grow audiences

The London Orchestral Marketing Consortium worked with developer Kodime to create an app, Student Pulse, which combined paperless ticketing, a loyalty scheme, social sharing functions and geolocation services. By looking at the motivations and attendance patterns of their target audience - students - the consortium worked out what was needed for an effective app. This case study describes the development process from both the marketers' and the developers' perspectives.

An app was created that combined easy paperless ticketing on the mobile channel with a loyalty scheme, social sharing functions and geo-location services. During the development process the LSO’s Digital Marketing Manager, Jo Johnson, worked with the University of Salford on a research project that looked into the attendance patterns and motivations of a student audience, one that every arts organisation is keen to nurture as part of their future audiences. During focus groups it was discovered that, like many of the ‘infrequent’ attenders targeted in the Music to Remember campaign, they were not loyal to one orchestra or venue, and took advantage of several of the London orchestras’ separate student discount schemes. Students told the researchers that what would improve the LSO Pulse would be to have more concerts listed in the app.

So we began to think: if we were to collaborate on one joint orchestra- and venue-wide student scheme and run it through this one central piece of technology, would we be able to reach more students?