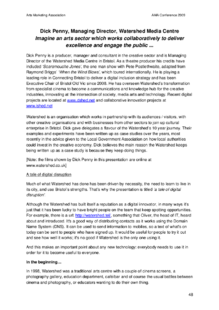 Collaborative working, digital innovation and how to trust your audiences

Watershed's 10 year development journey is discussed openly and honestly, with a close look at its reputation as a digital innovator, a new understanding of what its role in a modern city might be, and learning how to communicate more effectively with audiences.    Testing times and business challenges are analysed and used as a case study to encourage risk taking and innovation across the arts sector.

Digital technology has pushed Watershed into spaces they wouldn’t normally expect. As technology is always new, it is constantly pushing Watershed to innovate. For example, it
was realised that many projects required a great deal of new material to be produced and shown outside the creative programme. This was creating many new relationships. The team therefore realised that they had to try and find out who all these people were: audiences, collaborators, participants. This process helped them understand how they were perceived and what they represented.

Mixing it all up is important, but just as the soup becomes richer, an organisation's role in it becomes increasingly complex. In Watershed’s case, it helped drive forward its
redevelopment. As a result of all the changes, the team was increasingly aware that the building (converted in 1982) was no longer fit for purpose. In addition, a great deal more
money was being spent than was being earned because of the increase in activity. Once funding had been found to redevelop the building, much time was spent figuring out what
Watershed was good at, and what it was doing that no one else was. It was time to make some choices.