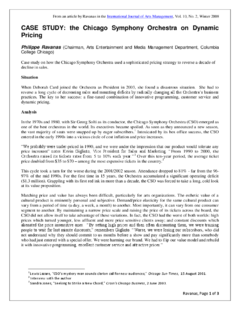 This case study presents how the Chicago Symphony Orchestra used a sophisticated pricing strategy to reverse a decade of decline in sales. The author describes how a radical change in the orchestra's business practices - such as introducing innovative programming, customer service as well as dynamic pricing - helped to increase audiences and subsequently sales revenue.

This cycle took a turn for the worse during the 2001/2002 season. Attendance dropped to 81% - far from the 96-97% of the mid 1990s. For the first time in 15 years, the Orchestra accumulated a significant operating deficit ($1.3 million). Grappling with its first red ink in more than a decade, the CSO was forced to take a long, cold look at its value proposition.

After observing variations in price elasticity from a customer segment to another, the CSO developed a dynamic pricing strategy, setting different prices for the same seat according to each segment’s behavior. It rescaled its rates based upon the four following parameters:

1. Place of the seat relative to the stage. Previously, the CSO followed common industry practice and scaled its ticket prices according to a seat’s distance from the stage.