Captioning theatre performances for deaf and hard of hearing people 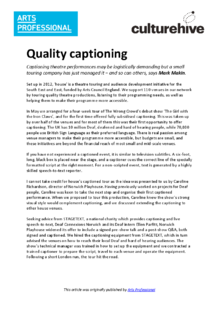 
This article describes ‘house’s’ captioning of a theatre tour for deaf and hard of hearing people. A six-foot long, black box is placed near the stage, and a captioner cues the correct line of the specially formatted script at the right moment. For a non-scripted event, text is generated by a highly skilled speech-to-text reporter. At Norwich Playhouse, they captioned the event and included a signed and captioned pre-show talk and a post-show Q&A,

In May we arranged for a four-week tour of The Wrong Crowd’s debut show ‘The Girl with the Iron Claws’, and for the first time offered fully subsidised captioning. This was taken up by over half of the venues and for most of them this was their first opportunity to offer captioning. The UK has 10 million Deaf, deafened and hard of hearing people, while 70,000 people use British Sign Language as their preferred language. There is real passion among venue managers to make their programme more accessible, but budgets are small, and these initiatives are beyond the financial reach of most small and mid-scale venues. 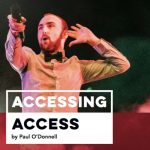