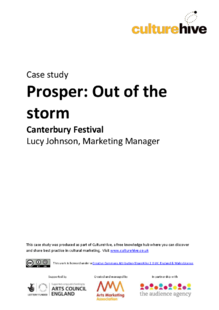 
Canterbury Festival is an annual international arts festival that runs for two weeks every October. As well as programming national and international performance during those two weeks, the Festival strives to maintain a year-round presence by supporting new projects and the wider arts scene in East Kent. This case study describes how the Festival’s Prosper project raised awareness through supporting experimentation and collaboration to widen the Festival’s engagement within the cultural sector in the region.

Perhaps one of the most imaginative collaborations is ‘White Horses’. This has brought together artist Tracey Falcon, Whitstable Yacht Club and Canterbury Christ Church University. Their Experiment saw them take aerial photographs of the Yacht Club in action, which they transferred into a spectacular collage of images on a yacht sail that has toured around various boat shows. At one event over 9000 people engaged with the piece, providing almost unanimously positive feedback. The team have now created a flotilla of sails printed with commissioned artworks, offering an unexpected gallery experience on sea and shore.