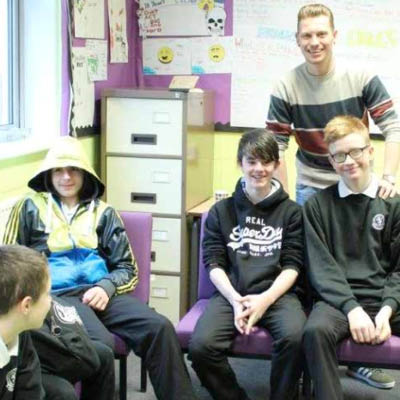 Literature Wales believes that literature belongs to everybody and can be found everywhere. We work collaboratively, bilingually, and in a wide range of communities to make sure literature is a voice for all.

We believe in empowering people, groups and communities by supporting them and giving them the tools to develop the literature programmes, events and schemes they want and need in their own local area.

South Wales Literature Development Initiative is Literature Wales’ flagship outreach project. Since 2007, it has offered creative activities to groups and individuals who may not have had the opportunity to participate with mainstream arts and culture.

Working closely with ten Local Authorities over the last eight years including Caerphilly, as well as the Rhys Davies Trust, SWLDI has:

SWLDI workshops aim to engage with people who may feel cut off from the traditional centres of art and culture by bringing activities to their doorstep and tailoring the content according to their needs.

Rap stars at Lewis School is just one of the projects from the South Wales Literature Development Initiative.

How we began the project

At Literature Wales, we knew we wanted to work with disaffected young people. Working with Caerphilly Arts Development team, we came up with an idea.

The Arts Development Officer spoke to schools and we met with the Deputy Head of Lewis School, which provides informal education for young people not in education, employment or training (NEET). We pitched the idea of rap to engage young people with music and writing.

The Rhys Davis Trust had funding available specifically to engage NEET groups. We made an application and secured funding towards the project, which would focus on developing communication skills, team work, digital skills and attitudes.

We contacted two artists that we had worked with before, poet Patrick Jones and rapper Rufus Mufasa.

Our target participants were on school premises but not in mainstream school. Most had not been engaged in reading but were into music.

We always had rap in mind but we developed the project very much with the young people. We focused on finding out what their strengths were. Some liked to perform and others liked to write.

Rufus did a lot of the writing initially and the young people focused on spoken word and sound.

We developed a safe environment for the young people to learn, where there was no way they would fail.