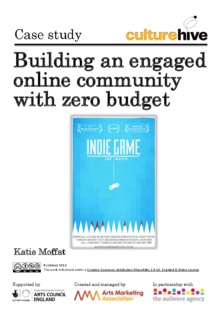 Indie Games: The Movie (2012) is a documentary film about the video games industry, made by Canadian filmmakers James Swirsky and Lisanne Pajot. This case study describes how the filmmakers created a marketing buzz around the film despite having no budget for marketing or advertising; the awareness of the film was entirely created via word of mouth. The process of making and distributing the film has been catalogued by Swirsky and Pajot on the film’s website.  It is partly from this blog post series that, with permission, the content for this case study has been taken.

Using the ‘Think Like A Fan’ idea they made sure that they catalogued and shared every step in the process of producing the film. Having a Twitter account and a Facebook page for the project is fine but you need content to pour into them. To this end, over the course of the production, they produced and published (usually from hotel rooms on the road) 88 minutes of extra video content. While none of this was used in the final film, they guessed correctly that it would be of interest to the core audience. In addition they maintained an active production blog, posting over 150 entries in 70 weeks of production.