Britten Sinfonia's 'A Tenner for a Tenor' campaign 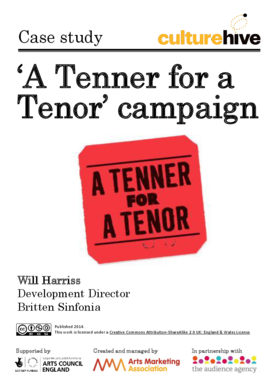 
Britten Sinfonia is the UK’s flagship chamber orchestra. In 2010 the orchestra launched a nine-month campaign called ‘A Tenner for a Tenor’ with the aim to generate support for a commission from acclaimed British composer Jonathan Dove, for a chamber ensemble and solo tenor voice. It was the first time Britten Sinfonia had used a crowdfunding approach to fundraising with a single donation of £10 to help commission this piece of work. This case study describes in detail the campaign and how it has sparked a new approach for Britten Sinfonia’s fundraising programme, with crowd-funding now embedded within the orchestra’s fundraising strategy.

The key elements of the campaign were: