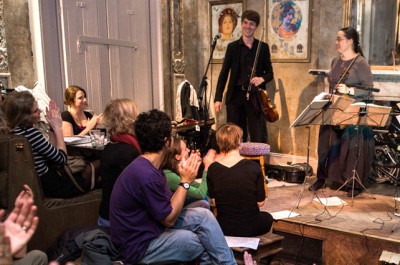 By Orchestra of the Age of Enlightenment

This case study looks at The Night Shift, a radical new concert series created to attract new and younger audiences to experience the work of The Orchestra of the Age of Enlightenment (OAE). As well as young people, the series targeted infrequent and non-attenders of classical music by taking classical music out of the concert hall, and presenting concerts in an informal, interactive, friendly way. The result was a breaking down of barriers between performers and audience, while maintaining the high artistic standards of OAE's existing concerts.

The Night Shift was designed so that it built upon our existing concerts, which had been conceived through the OAE’s player-led structure and delivered by OAE management. The Night Shift involves many of the artists with whom the Orchestra works regularly.

The event is an hour-long late night concert, introduced from the stage by presenter Alistair Appleton and featuring repertoire drawn from ‘standard’ OAE concerts. Before the concert, the bar always plays host to live (non-classical) music and afterwards a DJ concludes the evening.

As well as being intended to reach new audiences the programme was also designed to alter and change the relationship between performer and audience, breaking down the wall between seat and stage – we were interested to see the impact of this on audience and performers alike.