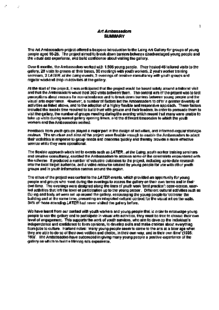 A report on the 6 months Art Ambassadors project at the Laing Art Gallery in Newcastle which aimed to break down barriers between disadvantaged young people aged 16 – 25 and the visual arts experience, and build confidence about visiting the gallery. The report looks at the project aims which included testing perceptions and methods of communication, informing gallery programming policy and developing the Laing's audience base. It provides an evaluation of the methodology showing how they communicated to and worked with the target audience, a summary of how the project was successful and puts forward recommendations for future work.

The Ambassadors immediately encountered barriers in the perception and attitudes of youth workers and group leaders, before making contact with young people themselves. Primarily, this was due to low awareness of the gallery. One contact stated that he had lived in Newcastle eight years before he had even heard of the Laing, and he was therefore disinclined to use it now.

Other leaders felt the Laing is not somewhere that young people are allowed to visit. Several leaders asked permission to bring their groups to the gallery!

Some leaders said that they feel the Laing is not for them, or their groups, as the collection and the building is 'white middle class'. One stated he disliked the fact there was, "no representation - the African, and Asian, community has been here for many years. That's the only way you could make the African community feel part of this place!”. Workers questioned how they could use the gallery eve n before visits were discussed. Others assumed there was an admission charge.