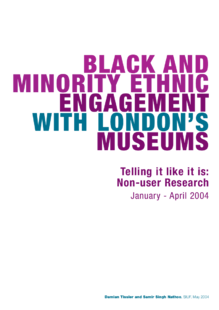 This research investigates why London's museums and galleries do not attract an audience that more truly reflects the diverse multi  cultural and multi ethnic demographic character of the capital's resident community. The research used non-user research through street surveys and focus groups. The street surveys revealed a general lack of interest in museums and galleries among BME groups. These were followed up by focus groups which explored the views and attitides of BME museum non users in greater depth.