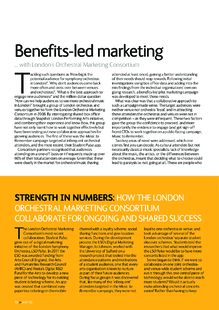 Tackling such questions as ‘How can we help audiences to see more orchestral music in London?’ brought a group of London orchestras and venues together to form the London Orchestral Marketing Consortium in 2008. By interrogating shared box office data through Snapshot London Performing Arts initiative, and combining their experience and know-how, they have learnt how to work together effectively and have been testing out new collaborative approaches for growing audiences.

What was clear was that a collaborative approach to such a campaign made sense. The target audiences were neither venue nor orchestra ‘loyal’, and in attracting these attenders the orchestras and venues were not in competition – as they were infrequent. These two factors gave the group the confidence to proceed, and more importantly the evidence to engage (and get sign-off from) CEOs to work together on a public-facing campaign, Music to Remember. Two key areas of need were addressed, which one comes first you can decide. As cultural attenders but not necessarily classical music specialists, lack of knowledge about the music, the artists, or the differences between the orchestras, meant that deciding what to choose could lead to paralysis i.e. not going at all.

How Visit London can help you reach more visitors