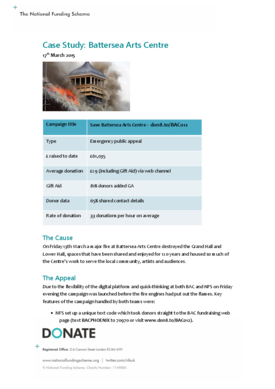 
On Friday 13 March 2015 a major fire at Battersea Arts Centre (BAC) destroyed the Grand Hall and Lower Hall spaces. Before the fire engines had put out the flames a national emergency appeal had been launched by BAC and the National Funding Scheme (NFS). The flexibility of digital fundraising through mobile and online donations contributed to the success of this fundraising campaign. This case study includes a useful infographic mapping the key elements of this appeal.