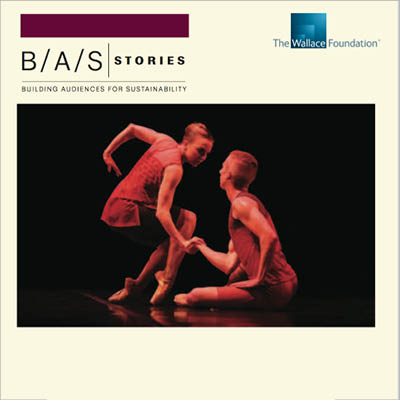 This article by Andrew Decker, published by The Wallace Foundation, explores the steps Ballet Austin has taken to expand its audiences for unfamiliar works.

This article is part of a series describing the early work of some of the 25 performing arts organisations participating in The Wallace Foundation's $52 million Building Audiences for Sustainability initiative. Launched in 2015 as a response to the declining audience base for a number of major art forms, the endeavor seeks to help the organisations strengthen their audience-building efforts, see if this contributes to their financial sustainability, and develop insights from their work for the wider arts field.

Every December, Ballet Austin puts on "The Nutcracker" choreographed by the company's artistic director, Stephen Mills. Virtually all of the 14 performances at the 2,442-seat Long Center for the Performing Arts are filled to capacity. "We could sell out more shows", says Cookie Ruiz, executive director of the Texas company, "but it would wear our dancers out."

Packed houses are the case for other classics too. But a different picture emerges for more abstract works, which don't attract the crowds that flock to "Swan Lake", "Sleeping Beauty" and the like. That reality is frustrating for the dance company – and not just because unsold tickets mean unrealised revenue. It also runs counter to Ballet Austin's mission: to create new work and develop talent, thereby extending the ballet repertoire and advancing the art form. Ruiz sums up the problem with a simple question:

"How do we go about developing larger audiences for entirely new work?"

In 2015, Ballet Austin embarked on a six-year project to get some answers, spurred in part by a grant from The Wallace Foundation. Hewing to principles of what's loosely known as "continuous improvement", the ballet company has been conducting research, developing initiatives informed by what the research suggests, examining the results – and then launching new marketing strategies and engagement offerings based on the findings. Less than a year and a half into the venture, coordinators of the work at Ballet Austin have often been surprised by what they have learned - especially by the way research can upend even long-held assumptions.

Ballet Austin presents what is known as neoclassical ballet, which runs a wide gammut. On the more traditional end of the spectrum, ballerinas are en pointe, upright and vertical, with men supporting them. Costumes are lavish, the sets opulent. On the more contemporary end of the spectrum, movements engage the dancers' full bodies, costumes might be nearly as spare as leotards, and sets might be abstract, with fields of colour or industrial-seeming paneling serving as backgrounds to the ensemble onstage.

The company is housed in and owns a two-story, 34,000-square-foot complex that includes seven rehearsal spaces, studios, and a 287-seat theatre in downtown Austin, where it is difficult to turn a corner and not see a towering construction crane. Ballet Austin holds its performances off site at the Long Center, the city's sleek, modern performing arts facility. When artistic, marketing and senior administrative staff members at the company first came together for this project, they set out to determine what was drawing people to the Long Center performances. They were not considering altering programming to meet audience tastes but they hoped to understand how audiences were viewing and responding to what the ballet company produced.

At first, Ruiz and Michelle Martin, Ballet Austin's associate artistic director, sought to categorise performances by the style of movement, a way to help identify what qualities people responded to in a production. But too many shows fit into multiple categories and ticket sales could vary within a single classification. One day while studying a whiteboard map of categories that the staff had been working on for a month, Ruiz had a revelation: "It's not about whether it's classical or neo-classical [or contemporary], but all of a sudden we realised [that it was] more about the familiarity [of the story rather] than the style."

With this lens, they came up with new classifications. Category 1 included the classics, with much-loved music and a narrative story line. Category 2 included narrative ballets with a contemporary feel in dance, design and music, like Mills' "Hamlet", from 2000, which features music by Philip Glass and has now been licensed by six companies in the United States and one in Germany. Ballet Austin considers Category 2 its "sweet spot" because it allows the company to both present new work and fill the Long Center's large auditorium with stories that audiences are familiar with.

Categories 3 and 4 were mixed repertoire productions: programs of a few shorter, non-narrative pieces, often more experimental and avant-garde. Category 3 productions provided some familiarity such as music by Mozart or Bach, or choreography by Mills. Category 4 productions presented unfamiliar choreography and music.

The categories together suggested a "familiarity continuum", which flowed roughly from Category 1 to 4 in a logical sequence, consistent with both ticket sales and research from 2001 that has revealed that most audience members first came for the classics and then, slowly, over a period of three to five years, cautiously explored newer works. Julie Loignon, director of audience engagement, sales and services, said she thought of the continuum like "a set of tracks that a customer would get on" and move from "The Nutcracker" to less familiar works.

And it was a great hypothesis – until market research came in and revealed unexpected nuances in audiences' tastes, interests and behaviours.