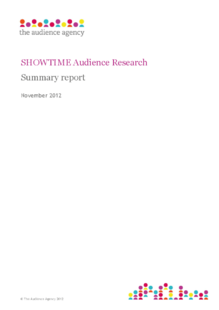 This report summarises the findings of research carried out on Showtime - London's outdoor arts festival, held as part of the London 2012 Cultural Olympiad. It includes the results of a major face-to-face audience survey of more than 2,100 people, as well as an estimation of the total size of attendance. Includes an analysis of attendees' MOSAIC profiles and demographic breakdowns.

The postcodes that were collected in the survey were profiled using the Mosaic geo-demographic segmentation tool. This can be used to compare the profile of the SHOWTIME audiences with the profile of typical arts attenders (based on Snapshot London: Performing Arts engagement indicator).

The following chart shows that there were some key differences between the audiences at Showtime and typical attenders to the performing arts. There were much less attenders from affluent segments such as ‘Alpha Territory’ and ‘Professional Rewards’ and higher proportions from more mixed segments such as ‘Upper Floor Living’ and ‘Terraced Melting Pot’.