The How Much? Project was an audience development scheme aimed at developing new young theatre audiences in Sheffield. This research summary discusses the findings – the changes relating to price, product and promotion.

The research found that over half of young people spend over £45 each week on ‘nights out’; a few spent more than £100, but a significant number spent less than £20. Thus the price of tickets, at £3.50, was generally acceptable, although theatre expenditure is subject to more scrutiny than other leisure pursuits. One said, ‘I wouldn’t argue with paying £3.50 for a night’s entertainment.’ And another said, ‘The How Much? scheme is excellent as it’s not a waste of money if you don’t enjoy the production.’ 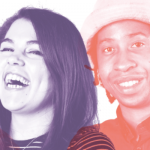 Guided by Young Voices
You may also be interested in