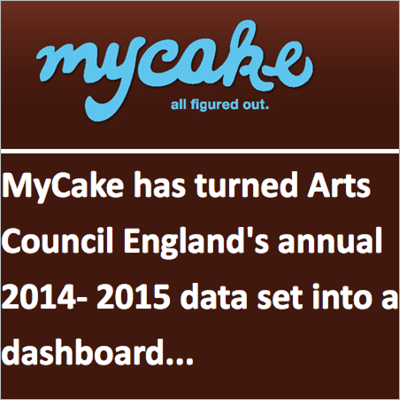 Open the dashboard in a new window and click Play to interact while you read.

How does it work?

The dashboard is designed to enable any organisation to look at the National Average and compare it to a sample of their choice. We’ve set up three types of ways to slice the data – by art form, by geographic region and by turnover range. The art form and geographic region slices are freely available to all.

The ‘Selected Group’ box summarises the sample you’ve selected and indicates the number of organisations in the ‘size of selected sample’.

There are all sorts of things you can do with this dashboard but to get you started we thought we’d look at five questions you might want to explore.

What insight can I glean from the 'national average' income figures?
Which bit of the dashboard do you need to look at?

Click on the Income button and you'll find that the second column of data has the National Average (AVG) in it. Note that this is made up of data from 698 organisations across all art forms and all regions.

You'll see that all the income data is presented as a percentage of total income.

What does the data tell us?

The ‘National Average’ tells a story that many people will be broadly familiar with but nonetheless it is a summary that is worth a look just to orient oneself with the data.

The largest single source of income to NPO’s across the portfolio is the ACE NPO funding. All of the last three years are sitting at a similar level around 37-38% of annual turnover and in 2014-15 the precise figure is 36.9% of total turnover.

We’re not going to spend time analysing this national average as this ground has been covered pretty thoroughly by ACE in their annual report.

What we would highlight are the national averages for the earned and contributed income lines as they form a useful baseline against which to compare artform, regional and turnover range clusters of arts organisations.

How do business models differ between small and large organisations?
Which bit of the dashboard do you need to look at?

Use the up arrow in the ‘To’ box to set an upper limit for the turnover of organisations in the Selected Sample to £100,000. You’ll find that this creates a Selected Sample of 26 organisations whose data is displayed in the first of the two columns of data to the left of the National AVG and who between them have an average turnover of £79,000 (see the bottom left box marked ‘Selected Group’ and the row described as ‘Avg Total Income (£000)’. Click on the up arrow again to set the limit at £200,000 and you’ll find that the sample now encompasses almost 20% of NPO’s (130 in fact with an average turnover of £139,000).

To look at the largest third of organisations in this data set click on the refresh button to reload the dataset (this will clear the contents of the To and From cells) and then set the ‘From’ turnover level at £1,050,000 (either by clicking on the up arrow or typing the figure in). This selected sample has an average turnover of £6,608,000.

What does the data tell us?

We know from previous work such as Size Matters that the business models of small arts organisations are very different indeed to those of large organisations. This selected sample demonstrates this difference very starkly.

Across all art forms and geographic regions small arts organisations achieve a far lower percentage of their total income from Earned Core (14.5% in 2014-15 for organisations with a turnover of under £100k vs. national average of 25.9%) and are far more dependent on ACE Regular funding (73.0% vs. national average of 36.9%) than their large organisation counterparts. We’re not going to make comment upon whether we feel this is too high a level of dependency or alternatively whether it is appropriate given the type of work these organisations undertake; instead we’d simply say that it is important that as a sector we understand the differences between the business models of large and small organisations so that when we are setting targets for income diversification they are set in a manner which is appropriate to both the starting point and the best in class for an appropriate comparison cluster of organisations.

It is interesting to note that small organisations are benefiting from ACE Lottery Development funds (in the <£100k turnover band this is worth an average of 1.8% of turnover in 2014-15) and also ACE – Other Revenue (20.3% in 2014-15) – this makes sense, they are a cohort of organisations who would lack the funds to spend on development unless it was specifically added in to their revenue and activities.

Whilst on a national level the percentage of income achieved from donations, trusts and sponsorship is not terribly high it is a little lower in the small organisations – sponsorship 4.5%, trusts 7.9% and donations 2.5%. This is a substantial achievement given that in small organisations these activities are usually undertaken by the Director rather than the specialist teams in larger organisations. The second question to ask is what percentage of the team’s time is spent on these activities and what therefore is the return on investment from these activities vs. other income generating work? This dashboard has been designed to only show the averages but of course we could pull out the data on the best in class separately if it is of interest. Alternatively you can download the raw data set and look for these examples in it.

In contrast if we look at the largest third of the NPOs (those with a turnover of over £1,050,000) we see a very different picture. The largest single source of income is Earned Core at 35.0% with ACE regular funding coming in second at 23.3%. Earned Income – Suppl is the third largest source at 11.9% and we would suggest this is a result of organisations with physical venues maximising the earning potential of their spaces (something which of course the small and non-venue based organisations would struggle to do). Local Authorities continue to be important, indeed roughly as important as for small organisations at an average of 11.3% of turnover. We know that there is a London bias in both sponsorship and donations so its interesting to see that even when this is diluted into the average of all the large organisations across the whole of England and across all art forms there is still a significant benefit to being large vs. small when it comes to these income streams.

In summary, there are some very distinct differences in the income models for large vs. small organisations. If you are using this data to set targets for your own organisation it would be well worth your while establishing an appropriate turnover range to compare yourself to rather than simply comparing yourself to the national average. 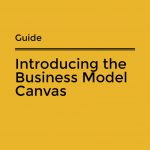 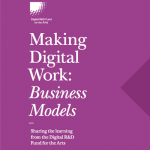