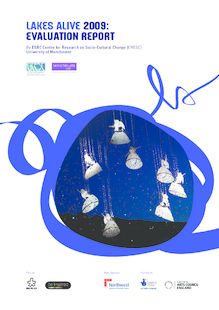 An evaluation of Lakes Alive 2009, year one of a four-year programme of outdoor arts in Cumbria

A report and evaluation of audiences for Lakes Alive 2009, the inaugural year of Cumbria’s unique four year festival which aimed to put the county at the centre of outdoors arts nationally and to make a key contribution to the social legacy of the Cultural Olympiad. The report looks at the demographic of the estimated 75,000 people who took part in 2009 and the impacts of participation in street arts spectacles and events. The research methodology followed a traditional evaluation model, focusing on a face-to-face survey of audiences at Lakes Alive events, this laid the foundations for long term, in-depth and qualitative research on the engagement dynamics of street and outdoor arts.

Figure 1 shows that just over half of those in attendance were people from the immediate locality (local residents and those from surrounding settlements).

Although it is in the nature of an outdoor arts festival that all in attendance are exposed to the performances and spectacles, considerations of visitor economy make it important to know about motivations for attending, in particular how many people from outside of the region travelled specifically to see the Lakes Alive events. The analysis in Figure 2 shows the very considerable pulling power of the festival, which accounted for 4 in every 5 visitors at event locations from elsewhere in Cumbria, over two-thirds visiting from the rest of the North West, and well over half of those travelling from the wider UK.5 In addition, and most notably of all perhaps, one in three of overseas visitors surveyed were in the UK specifically to attend Lakes Alive events. In terms of absolute numbers of people, this indicates that

Lakes Alive specifically attracted 16,790 ‘new’ visitors to Cumbria, 5,090 of whom came from outside of the North West region.

Looking in a little more detail at the dedicated visitor group (Figure 3), this was split between day visitors and those staying for one or more nights at a ratio of 2:1. On average, overnight visitors to the festival stayed for 3 or 4 nights (median 3, mean 3.7). The distribution of visitors by origin indicates that over 60 per cent of those staying overnight were travelling from outside of the North West.