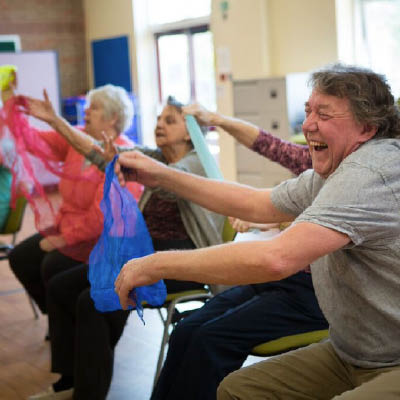 Discover top tips for recruiting participants for older people projects and responding to health and social issues. Plus gain valuable insight into Grants for the Arts funded projects.

AESOP is an arts charity and social enterprise, originally founded in 2009 and set up as a stand alone charity in 2014.

AESOP believes the UK is blessed with world-class arts that sit on the periphery of other sectors working to achieve positive social change. It addresses challenges and unmet needs in society with suitable, evidence-based, cost-effective and sustainable high quality artistic activities.

AESOP's audiences are identified through social need rather than organisational priorities. It identifies pressing issues around health, wellbeing and isolation and develops projects and audiences accordingly.

We planned to address the issue of older people's falls through high quality dance.

We planned to pilot Otago and FaME dance sessions in London, Cheshire and Oxfordshire. The target audiences for these would mirror those of the original programmes.