A literature review of architecture and design impacts 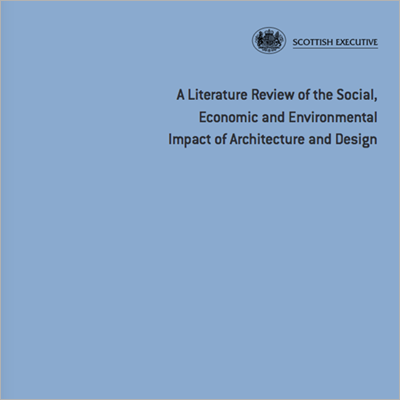 
Developed to inform new design to improve quality of life in Scotland, this literature review explores national and international evidence of the social, economic and environmental impact of architecture and design.

The United Kingdom is in the midst of its biggest building boom post World War II. Much of this transformation is in the public sector, spearheaded by the increasing belief of policy makers in the potential difference that good, or bad, architecture and design can make to the lives and aspirations of individuals and communities.

In Scotland, this is evident in:

We know that well-designed buildings and places have the power to inspire us, to make us feel good about who we are, what we do and where we live, and importantly, they motivate us to achieve more - for ourselves and for our communities.

In light of the development of the Policy on Architecture for Scotland and to provide better access to information on the impact of architecture and design in many spheres of life, the Scottish Executive commissioned this literature review. The aim was to gather sufficient national and international evidence of the social, economic and environmental impact of architecture and design, both positive and negative, to inform new design with a view to improving quality of life.

Research was sourced from a total of 158 organisations who supplied 195 documents from throughout the UK, mainland Europe, particularly Scandinavia and as far a field as Canada and New Zealand. The intention was, as far as possible, to gather empirical evidence, not only of the impacts but importantly, of the building and design factors causing these impacts. The review was focused solely on the end-user, those individuals for whose use buildings and places are ultimately designed. Literature was reviewed from within the last ten years, between 1995 and 2005.

Download the report to read more:
A literature review of architecture and design impacts (PDF)