A guide to developing audiences for classical music 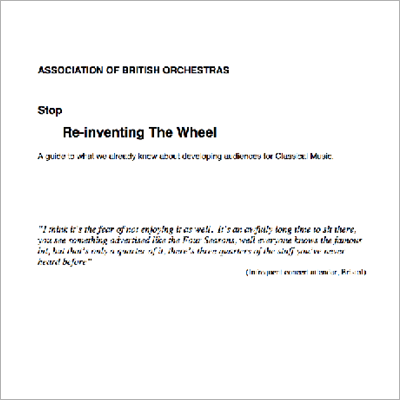 
Develop your classical music audiences with support from this practical guide full of research, case studies and details of successful initiatives.

The art of wheel re-invention (updated)

This guide was first published in 2000 and arose in part out of a frustration at the time and money many arts organisations - not just orchestras - spent on 're-inventing wheels'.

It became apparent in the writing of this guide that collectively we already knew how to do audience development. Thinking in some areas has moved on but the principles still apply. And given the additional resources now available there is even less excuse for wheel-reinvention.

Part one - a review of research

An overview of the market

The critical finding is that of those who do currently attend (c.12% of the population), the vast majority do so very infrequently - once a year or less often.

The socio-demographic characteristics of concerts attenders are examined, as well as levels of cross-over with other artforms.

The section closes with an attempt to assess the number of potential concert attenders, which may be as high as 12 million.

Understanding the market through segmentation

Segmentation is an approach that breaks down a 'market' into groups with similar characteristics, attitudes and behaviour.

Three such segmentations are outlined which offer complimentary views of, respectively: the whole market, potential attenders and current concert-goers and an attempt is made to link them together.

This section uses various research to outline the benefits people enjoy from classical music in general and the live concert experience. It also looks at the key factors in a decision to attend a concert and the main sources of information used by concert-goers and expected by potential attenders.