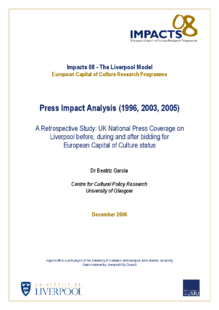 This report presents a broad and detailed analysis of the impact of the press on the City of Liverpool and analyses developments in the repositioning of Liverpool as a ‘world class’ city in the context of its nomination as European Capital of Culture (ECoC). The report covers UK national press coverage that refers to Liverpool in the years, 1996 (before the bid process), 2003 (the bid and nomination) and 2005 (event preparations).

The analysis of UK national press coverage about Liverpool in the years 1996, 2003 and 2005 offers a first indication of the impacts of bidding and winning the ECoC title on external representations of the city. These three time periods are relevant because they allow us to compare press references to Liverpool across time: that is, several years before the decision to bid, during the actual bid process and nomination, and in an interim year (post-nomination but well before the actual event in 2008). Subsequent analysis will look into local (city-based) and regional press representations.

The main thematic trends emerging from this retrospective analysis are as follows: