Oxford Playhouse presents and produces a wide range of live performances including tours of its own shows under the banner of Playhouse Plays Out (PPO), an on-going series of off-site productions and events which happen at surprising and unusual locations across the county. This case study describes how digital, guerilla and viral marketing techniques were used to promote the PPO production of Bicycle Boy. Aimed at 5-to-8-year-olds, Bicycle Boy ran for 12 performances in May 2013 in a specially converted garage just half a mile from Oxford Playhouse. 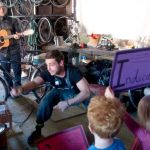