The library that borrowed from the public

This Marketing Society Scotland (2013) paper outlines an award winning campaign from the National library of Scotland (NLS) and Frame.  NLS is the world’s leading centre for the study of Scotland and the Scots. In the summer of 2012, a campaign that explored the story of cinema-going in Scotland over the past 120 years attracted 40,000 visitors, despite the competition of the Edinburgh summer festivals. Read about how a highly successful integrated campaign was developed and how a simple competition on Facebook resulted in 2,000 people engaging creatively to come up with their own movie poster headline to promote the exhibition. The campaign recently won Grand Prix plus Gold for integrated campaign, integrated strategy, public sector advert, copywriting and 4 or 6 sheet poster at the Scottish Creative Awards. 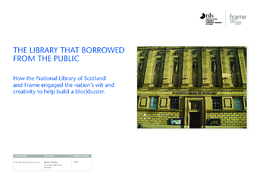