The centre for wellbeing at nef was commissioned by the UK Government's Foresight programme to develop a set of evidence-based actions to improve personal well-being. This report outlines the key findings from the study which firstly focused on the development of a list of evidence-based actions for enhancing wellbeing and then secondly the messaging of those selected actions, resulting in the 'five ways to wellbeing'. 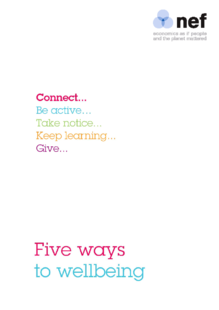